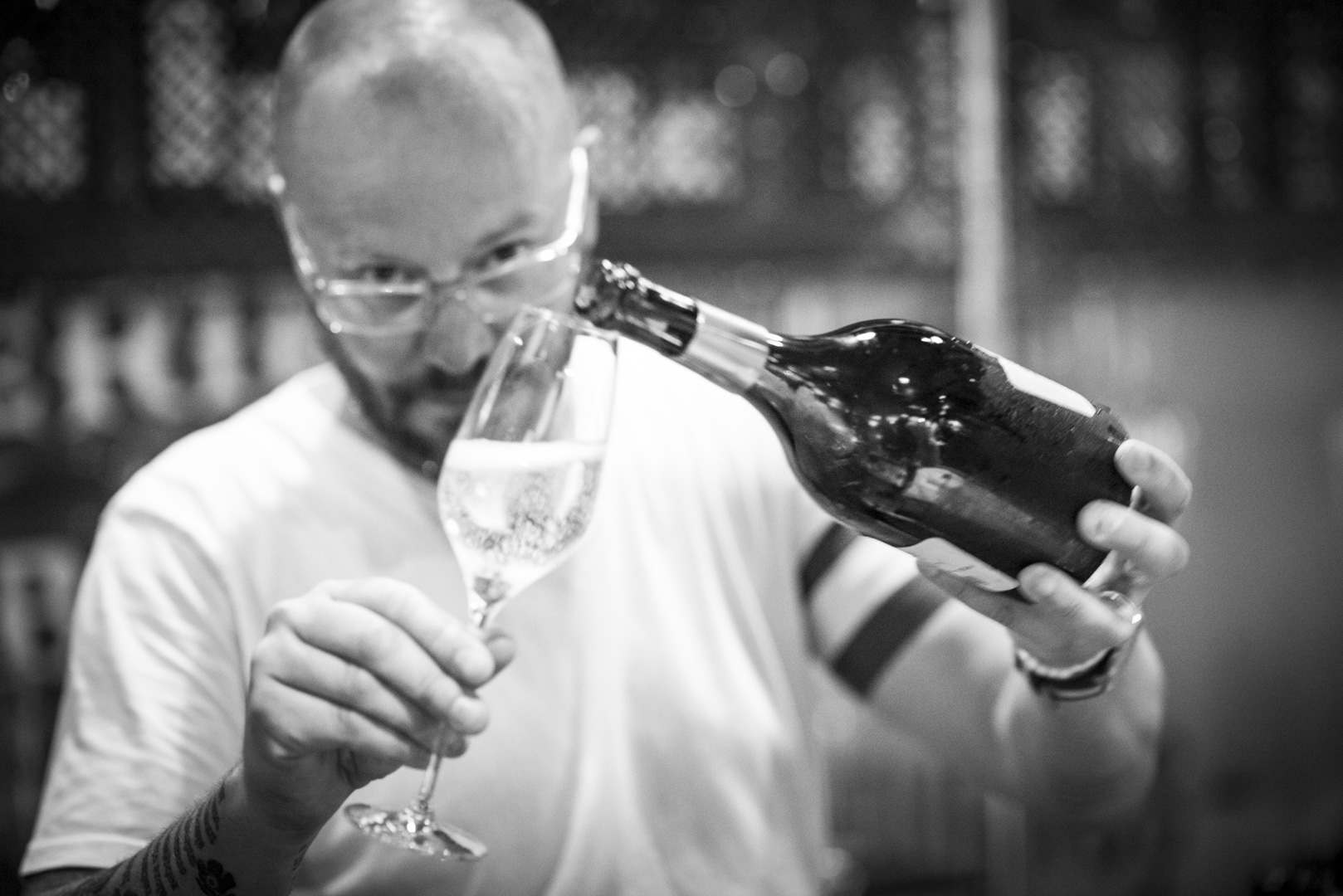 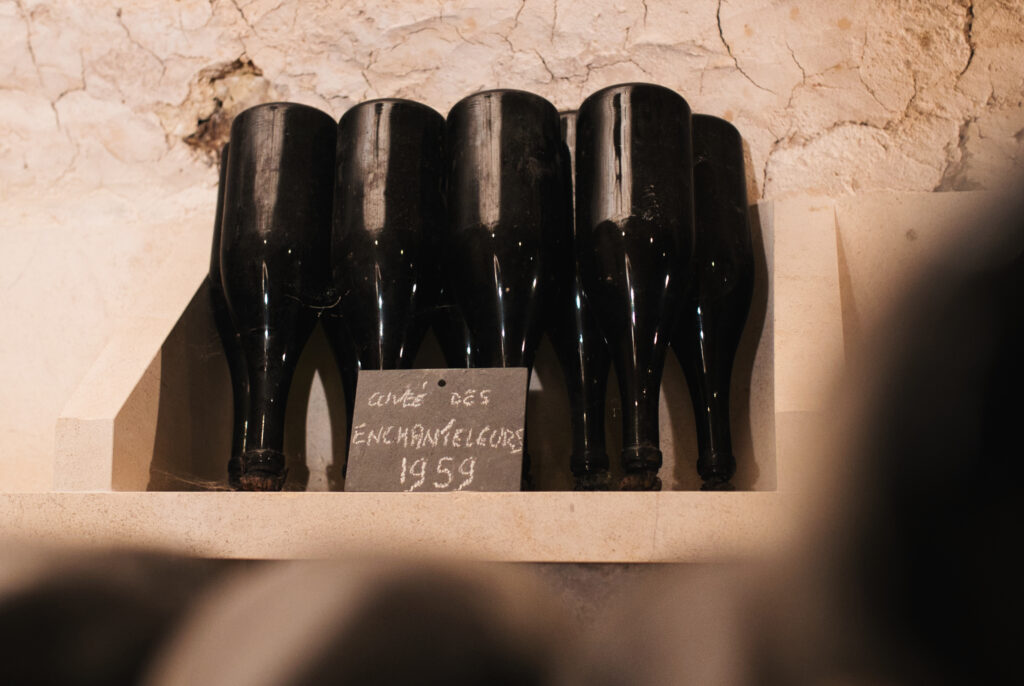 It was a warm and sunny June morning when I landed at the now equally classic and ugly-looking terminal 1 at Charles de Gaulles airport. I’m being picked up by Cyril, my driver. He navigates us towards Epernay with a sure hand on the steering wheel. I’m sitting in the back seat of our French (obviously) car on the way from the outskirts of Paris, it’s the end of June and as the suburbs of Paris fade away, the landscape becomes softer and the idylls more rural. The vines have already bloomed & change from green to summer-like garb in chlorophyll-green still with greenish shimmering elements here & there of a short intense and hot early summer. Most vineyards are in the starting pits to shoot out their clusters that will be the coming harvest of grapes.

[read more about this spring & flowering]

Later, everything is in the hands of the winemakers who expectantly and eagerly wander between the fermenter and see what happens. What will 2021 be like? Is it a legendary vintage on a par with the big ’02, or the warmer ’03, ’79 or even the ’61? Anyone who has patience will soon know. I head to Pierry & my night camp at the classic Hostellerie La Briqueterie to meet the ambitious team at the Henriot House for my meeting with the skilled winemaker Alice Tétienne.

I have been invited as one of only 3 Champagne critics to celebrate HENRIOT MEMORIES with the cellar master Alice Tétienne, Gilles de Larouzière Henriot (CEO of Maison & Domaines Henriot) & Richard Moreau (CEO of Champagne Henriot). On the morning of the 29th of June we met up at the humble but stylish estate of ‘Les Aulnois’ in Pierry. I just love how the people of in Champagne has that special touch how to blend historical buildings & put a certain modern touch to it.

Together with Champagne colleagues Essi Avellan Master of Wine from Finland & Alberto Lupetti wine writer from Italy we were up for a truely magical day. We took a historical walk through history in the eyes of Henriots wine makers.

We started the morning with a tasting of 4 Henriot champagnes in renovated old press house at Château Les Aulnois.

THE APÉRO IN THE SALON

TASTING NOTE ‘It was great to avoid Pinot Meunier in a large company’s non-vintage champagne. Since ten years the Meunier is unfortunately included. Still the aroma is classically bready and serious.The large proportion of Chardonnay is dominating the delicate, light taste. The house style is distinctive. Very nice and rounded thanks to up to seven years old reserve wines. Extremely constant over the years with a peak at 15-20 years of age. Lovely elegans in the magnum with ’12-base’

THE TASTING IN THE OLD PRESS HOUSE

TASTING NOTE ‘Deliciously balanced and nougat scented at launch with a little short and hard finish. On second tasting rather flat and dull. Third and fourth meeting oxidised with strange notes of cabbage and garlic. The winemaker team loves the wine so probably I am on a bad batch. Needs retasting. Now the fifth tasting was wonderful. I’m glad I was wrong. The vintage ’08 shows its concentration & really needed this time to come around. It really is a classic!’

TASTING NOTE ‘Fresh acidity, nice minerality and a good classical structure without a doubt, but I have to examine the aroma spectrum in more detail in an other sample of this wine. Also the second bottle I tasted had traces of this fermentation procss. Decanting is a must at this time. Only then will the roasting, fruit and minerality be in the right place.’

TASTING NOTE ‘The new name for Enchateleurs since 2005 now launched at the age of 14. Made from a rigorous selection of the best locations and classes of Pinot Noir from the three main villages of Montagne de Reims Mailly, Verzy and Verzenay as well as Chardonnay from Le-Mesnil, Avize and Chouilly. In Henriot’s own specially designed Hemera glass extremely rich and sun-ripened powerful from the start and perfect for the general public. Personally, I prefer to enjoy this cool champagne in my own glasses as I think you otherwise miss a bit of the fine underlying minerality that carries the richer sides of the wine. I love how minerals from Verzenay are combined with linden flowers, but also mandarin from Le Mesnil and orange chocolate from Mailly. Lots of pastries with dark chocolate notes and nougat of course, but also vanilla and butter. In my glass, a nice note of saltiness and iodine also appears through the then slightly more marked mousse.’

TASTING NOTE ‘The new prestige name that replaces Enchanteleurs is derived from the Greek goddess of light – Hemera. Equal parts Chardonnay from Chouilly, Avize and Mesnil-sur-Oger and Pinot Noir from Montagne de Reims represented by the three Grand Cru villages of Mailly, Verzy and Verzenay. I have been a little worried about the future of my beloved Enchanteleur when a couple of oxidative vintages were recently launched. Therefore, I was extra happy when I was able to state here that Henriot managed to make one of the best champagnes in all categories in the otherwise rather uninteresting year of 2005. Width, chocolate-saturated concentration and licorice-smelling fullness are not surprising, it has all been received for free by the weather. On the other hand, very few have managed to produce high-roasted, exotic floral and sweet citrus aromas that lift the heavy bumblebees from 2005. The goddess of light succeeded brilliantly with that piece of art.’

Then we moved over to some of the historic heroes from the vaults of Henriot. We moved from the newly refurbished stylish press room to the garden & were invited to a small passage under grand stairs. There a round room of sandstone revealed itself to us. Stacks with naked bottles, a small plack written with vintages like ‘1981’ – ‘1971’ – ‘1970’ – ‘1964’ – ‘1959’ – ‘1921’. Mind boggling indeed …. The setting was perfect, no odors & disturbing smell, perfekt temperature. We were seated in small armchair with a side table opposite of each other so that we could have an ‘around table talk’ of our impressions. Talk about attention to details. 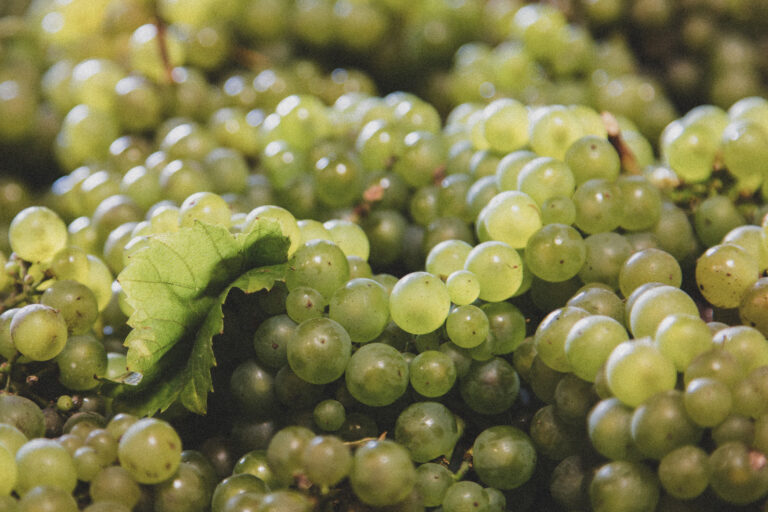 Twice a year, April & October, Mr Richard Juhlin & Champagne Club will arrange a VIP-trip to the best locations & producers in Champagne. This 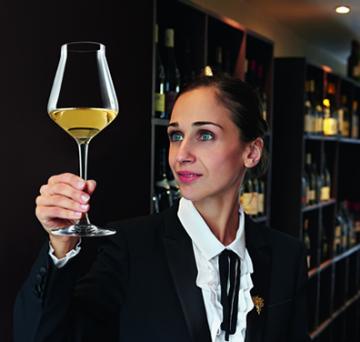 Every Saturday TheChampagneSommelier will ask 5 questions about 5 coeur de bouteilles to friends and Champagne lovers from near and far. This Week we took a bubbly chat 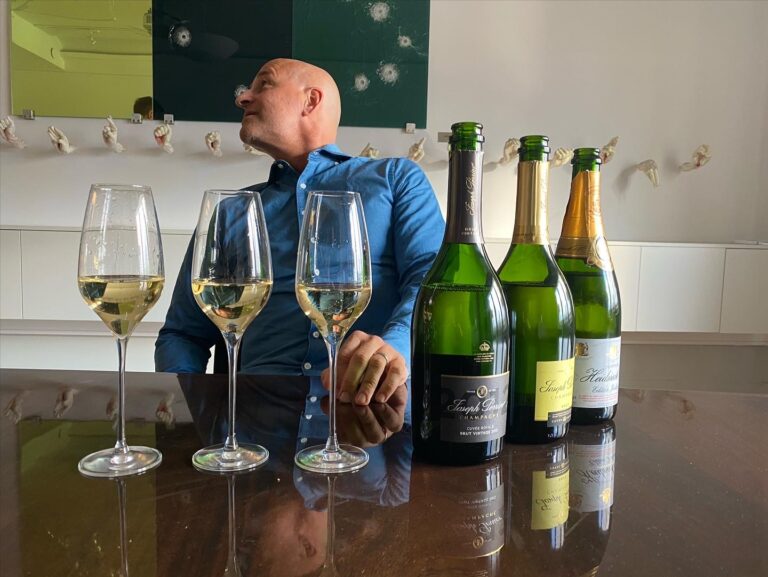